‹ Return to How tos

After you launch an instance in Amazon Lightsail, you can view its metric graphs on the Metrics tab of the instance’s management page. Monitoring metrics is an important part of maintaining the reliability, availability, and performance of your resources. Monitor and collect metric data from your resources regularly so that you can more readily debug a multi-point failure, if one occurs. For more information about metrics, see Metrics in Amazon Lightsail.

The following instance metrics are available:

On the CPU utilization metric graph for your instances, you will see a sustainable zone, and a burstable zone. Your Lightsail instance can operate in the sustainable zone indefinitely with no impact to the operation of your system. 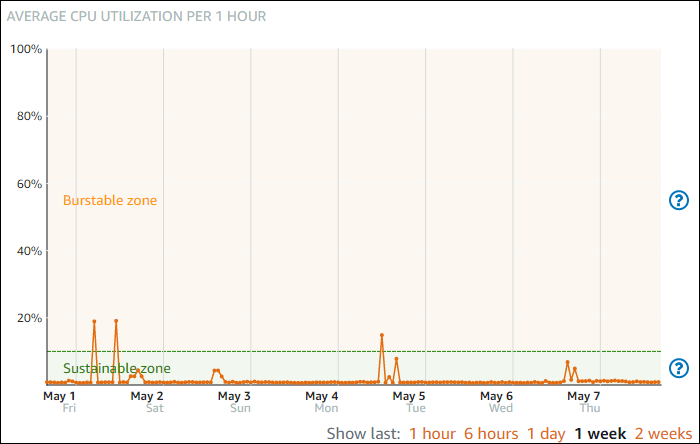 Your instance may begin operating in the burstable zone when under heavy load, such as when compiling code, installing new software, running a batch job, or serving peak load requests. While operating in the burstable zone, your instance is consuming a higher amount of CPU cycles. Therefore, it can only operate in this zone for a limited period of time.

Complete the following steps to view instance metrics in the Lightsail console.

Next steps after viewing your instance metrics

There are a few additional tasks that you can perform for your instance metrics: